The History Of Mehter: 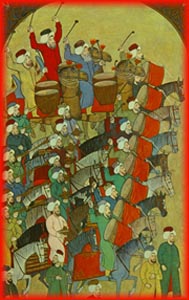 We see that the military music comes from 2500 years ago in Turkish from written historical regitration.Mehter is the oldest military band of the world. We see that written in the Orhun Inscription which is the oldest written source. It mentioned about the musical instruments “kübürge” and “tuğ”.The oldest Turkish dictionary “Divan-ü Lügat-it Türk” mentioned about musical team which plays in front of the khan and it's called “tuğ”.

The old Turkish states's tuğ teams had got these musical instruments; kövrük (kös) , tomruk (drum) , ceng (bell) . Turkish trumpet became famous in 12 th century and called “Nay-ı Türki” It was played war. Drum, flag, sovereignty were symbols of the Turkish sovereigns. They were kept becama sovereighty symbols of Turkish states which has built after Muslim Religion

The name of the tuğ changes to “Tabılhane” and “Nevbet”, so thetradition keeps going on.

The sultan of Seljuk II.Gıyaseddin Mesud sent tuğ, alem, tabıl (drum), nekkare, cevgan to Osmangazi who makes kayı tribe bigger and powerfull. This happen is the first establishmant of Mehter. 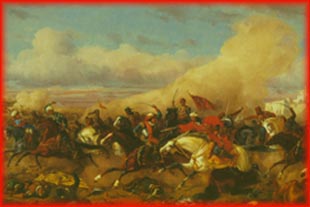 Mehter plays when there is war; out of the Sultan's palace when important state man change their position and their weddings.

Diciplin is their main rule when they practise. The people who are in Mehter Team have got a special walking. They always start with their right foot and have three steps. They turn left and right after they had three steps when they are walking. This is the Mehter's salutation.

There is one misunderstanding. Mehter doesn't walk two steps to forward, one steps to backwards like someone says. 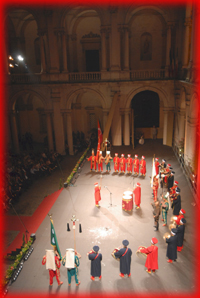 Mehter Teams take from storeys. The community is called ”storey” which takes from one of the instruments. Forexample; the Mehter with five storeys means there are five instruments from each kind. Mehter team can set up from 3, 5, 7, 9 storeys. Mehter Team had got 12 storeys at the Ottoman Empire state's time. Yavuz Sultan Selim has took more than 200 Mehter Team to the Mercidabık war and Kanuni Sultan Süleyman had took to Viyana.