Cevgan is a musical insturment shaped as a stick. It has got bells on the top which are made of silver or rice. The stick has small bells at the bottom. It has got tassels on the left and right sides. This musical instrument is especially for Mehter, it can't be used in any where else. The person is called “Cevgani” who plays cevgan.

Zurna is amin instrument of Mehter and is the oldest folk instrument. Zurna can played by blowing. We use it in all our weddings and celebrotions.
The body is made of plum or wild apricot tree. It becomes from two parts (body and sipsi) and has got a cap which is amde of boxwood. Zurna has got seven holes in front of it and 1 hole at the back side. Sipsi is a reed what makes a sound. It adds to a metallic stick which is a 5-6 cm tall and take on a cup with a circle part. There are two kinds of zurna. The first one is rough Zurna and it is sounding deep voice. This one can use in Mehter. The second one is cura Zurna and is sounding slender voice. 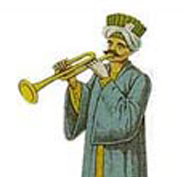 It's an instrument which is made of yellow rice. It's shaped thin and straight. It can only played dem with pipe. The pipe has been used in all orchestras and music teams in the world and still it's using by them. 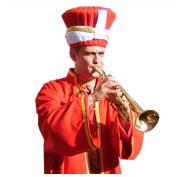 This instrument takes from two earthen pots if different sizes. Their opening have got tensioned leather. The body can made of clay of metal (copper) walnut or mulberry tree. The approximate height of the body is 30 cm. The goat's leather tensioned on the surface of Nakkare. It can played with two sticks. Their lenght is 35 cm. 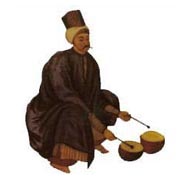 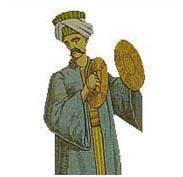 It's made of mine (It's mixtured of copper and tin) . It's a shaped of a circle. Teh interior side is broad. It's thickness is several millimeter. There is a hole in the middle of the bell. This hole has got ties to hold it with hands. It gives very strong regular sound. 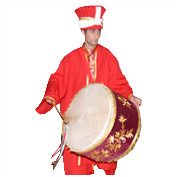 The drum is the top musical instrument which has been using by Turkish people for many years. The source is middle Asia . Drum has been brought to Anatolia by the Turkish of Seljuk and has been spreat out by Ottoman Turkish to Europe drums can be in different sizes. The biggest one is called rougt drum and the smallest one is called cura drum. Drum takes from a hoop of tambourine and tensional leather both of two sides. The hoop of tambourine can make from walnut, pine bluish tree, fir, linden tree, poplar tree. The leather of a goat or weaned calf tensioned by hoop and strap to both of hoop of tambourine's two sides. Drum can played by mallet or rod. Mallet's blow determines the powerful times of the melody. Rod uses at the slight times of the melody, this is called “çırpma” and when it is blowed with vibrations, it is called “dem”. 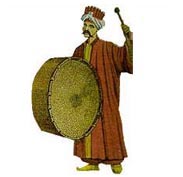 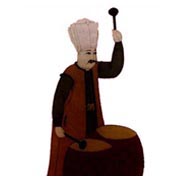 Kös is a percussion instruments. It's made of copper mine. A camel's leather tensioned at the top of a kös. The small ones on a horse; a little big ones move on a camel, the biggest ones move on an elephant. Kös can played with two mallets with right and left hands. The mallets are both in the same length. Mehter put the Kös side by side sicle and play. 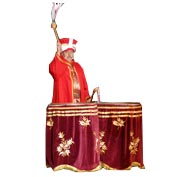